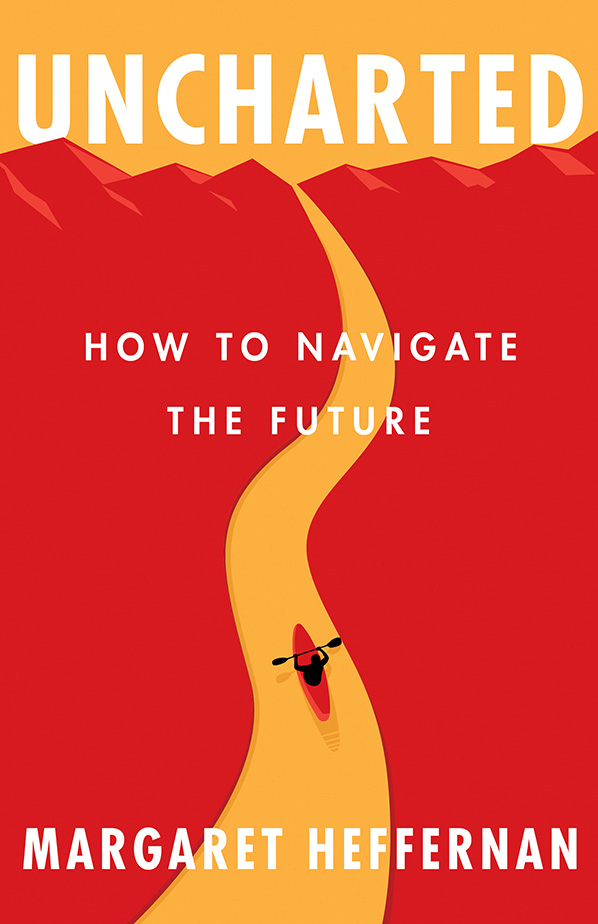 Uncharted
How to Map the Future Together
"I have never read anything quite like Uncharted. I was captured on page 1 and captivated to the very end. Margaret Heffernan shook my core beliefs and made me look at the world - and myself - differently. It doesn't get any better than that."

About the Book
Synopsis
UNCHARTED: How to Map the Future Together was first published in 2020.
Updated and revised for 2021. In February 2020, just as Covid-19 took hold in the UK, Uncharted by Margaret Heffernan was initially released. The coincidence was extraordinary. Here was a book which outlined how society, business and government were perilously unprepared to deal with uncertainty, just as one of the most disruptive events of a generation – a global pandemic – hit, throwing plans, predictions, systems and entire ways of thinking into utter chaos. Like so many risks in life the pandemic was “generally certain, but specifically ambiguous”; we knew that a new virus would likely emerge, but we did not know where or when, and we failed to adapt our thinking to prepare us adequately. Uncertainty about everything – from the nature of the virus to food supply chains, remote working and schooling to the very survival of businesses and entire sectors – gripped the world. Just as Heffernan had pinpointed in Uncharted, we had been relying on the false promises of technology to predict every eventuality. Covid painfully exposed the perils of doing so; businesses, hospitals and supermarkets were working at 100% capacity with zero room to pivot when everything changed overnight; not the most highly developed algorithm or accomplished super-forecaster envisaged the pandemic or provided a credible path out of it. In the book, some embraced this uncertainty, using it as an opportunity to explore new ways of thinking and radically change their modus operandi. From automotive giant Ford collaborating with designers and manufacturers to produce 17,000 ventilators in a few months, to the Designers and Artists' Collection Society (DACS) reconfiguring itself to use intellectual property law and tech to support the livelihoods of artists – Covid put us all to the test, but those with the courage to experiment and the imagination to see how and where, thrived. However, as Uncharted reveals, the pandemic is just one illustration of a wider problem that humanity is facing; we are now living in a world where so much is unpredictable that we need radically to rethink how we work and live, and who we need to be. Ranging freely through history and from business to science, government to friendships, visual arts to quantum physics, Uncharted is full of sharp insight and inspirational examples of how people adapt and flourish by thinking humanely and creatively in the face of uncertainty. Timely, captivating and "appealingly human" (FT), Uncharted challenges our "prediction addiction". The book explores how preparedness – doing everything today that you might need for tomorrow – provides the antidote to passivity and prediction. Updated and revised for 2021, Uncharted is a powerful retrospective about how the world changed in a year, and a captivating exploration of how to radically change how we think, plan, react and live.
Book Information
Published: February 20th, 2020
ISBN-13: TBC
Publisher: Simon & Schuster

From the Publisher
"We want to know the future. But the complexity of modern life won’t provide that. Forecasters g can’t see more than 400 days out. History doesn’t repeat itself; even genetics won’t tell you everything it promises. This refreshing book challenges us to resist the false promises of technology and efficiency and instead to mine our own creativity and humanity and create the future we want."
Purchase Links
Book Reviews
Reviews Index
QRCA Wisconsin Bookwatch BizEd Magazine Porchlight LeadershipNow Media Reviews
QRCA - Fall 2020
By Kay Corry Aubrey
Download PDF Margaret Heffernan’s Uncharted: How to Navigate the Future is an original and beautifully written look into how the events that have the most profound effect on humanity cannot be predicted. Margaret Heffernan was born in Texas but has spent most of her life in the U.K. She is a TED speaker and has had many successful careers that include thirteen years as a producer of documentaries for the BBC and as a serial entrepreneur and CEO of several tech companies in the United States. She is currently a professor at the University of Bath. Margaret has written four internationally-acclaimed books on business and how to live a meaningful life that meets the challenges of our time. According to Heffernan, modern society operates under a false belief that you can predict the future if you have complete data and a good model for how a complex system works. But Heffernan points out that by trying to simplify complexity, we miss seeing all the forces at work that produce a particular result. This misdirection is amplified by relying on data that are typically incomplete, full of error and bias. Heffernan explores how this folly plays out in many areas such as financial forecasting and DNA profiling, which she describes as a “chemical horoscope full of potential and possibilities but little certainty.” The genes that determine something as simple as hair color are incredibly complex. Even if science were at the point to confidently create designer babies, how do we know which traits will matter in the future? Our technology is advanced but incomplete and suffers from the same prediction compulsion. We have become reliant on invisible systems that we do not understand. As a result of outsourcing major areas of our lives to apps, we have lost human skills, such as the ability to direct our attention, form memories, read a paper map, deal with ambiguity, and deal with people who are different from us. The way we are profiled by technology and algorithms impacts our ability to get jobs or loans or gain access to other opportunities. Apps that show us how to raise our children diminish our ability to trust our own judgment. The algorithms are invisible—we do not know how they work or the value system that is embedded in them. But one thing is certain—they are designed to serve the interests of their creators and not the average person. Rather than closing our minds, predictions should stimulate fresh thinking and be used to “broaden and navigate our conceptual and imaginative horizons.” Heffernan shows how we can reclaim our power as individuals and collectively as a group. For example, the Coalition for Epidemic Preparedness Innovations (CEPI) has developed a four-pronged approach to defending against future epidemics. First, realize that epidemics come without warning. They move fast because of international travel and can spread across the globe within sixty days. Since the 1970s, new pathogens appear at the rate of one or more each year and no two epidemics are alike. The CEPI framework considers the messy and unpredictable forces that play into a pandemic such as politics, culture, and individual choice. By using the framework, epidemiologists can develop a more effective response. Huge problems cannot be solved by expertise alone. Scenario planning exercises help stakeholders explore the forces at work when dealing with a complex system. As Heffernan says, “Scenarios illuminate the contingencies, contradictions, and trade-offs of the real world, where no one interest or perspective is in control. That’s why they produce conflict but also epiphanies.” When running this type of experiment, it is important to recruit a diverse pool of participants. Work needs to be recast from hierarchical command-and-control structures into egalitarian “Cathedral Projects” where each person has a defined role and contributes to their full ability. Cathedral Projects, such as CERN and the building of the Sagrada Familia in Barcelona, are based on the pursuit of knowledge, powered by the energy and commitment of participants, and last beyond a single lifetime. From beginning to end, this is a wonderful and timely book that eloquently describes the challenges we face in our time and the skills we need to develop to thrive in the future.
Other Books by Margaret Heffernan