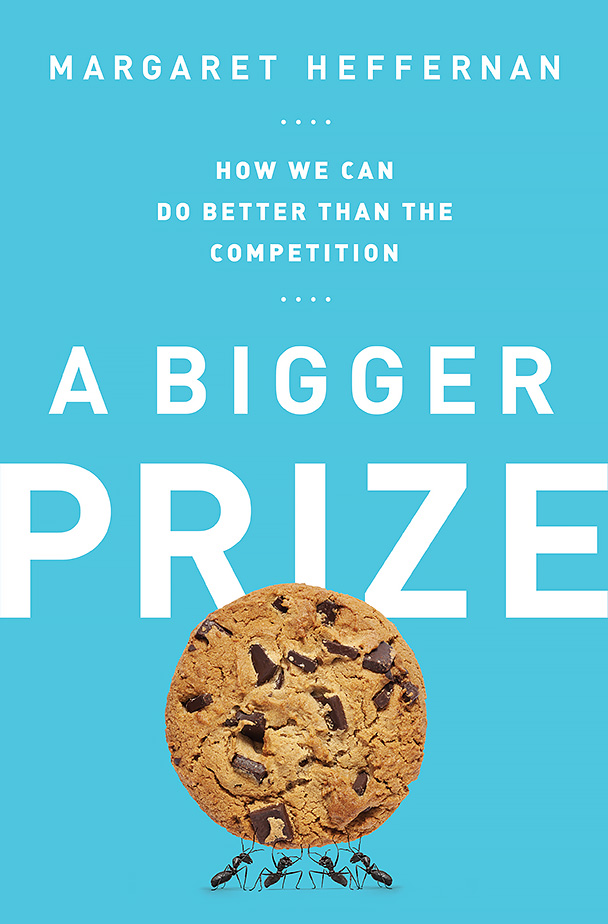 "Quote or brief overview of book in here please"

About the Book
Synopsis
A BIGGER PRIZE: Why Competition Isn't Everything and How We Do Better was first published in 2014. The Olympics. X-Factor. The Rich List. The Nobel Prize. Everywhere you look: competition - for fame, money, attention, status. Being top seems to be everything - but what is it costing all of us? We depend on competition and expect it to identify the best, make complicated decisions easy and to motivate the lazy and inspire the dreamers. But, as Margaret Heffernan shows in this eye-opening look at competition, competition regularly produces just what we don't want: rising levels of fraud, cheating, stress, inequality and political stalemate. Siblings won't speak to each other. Children burn out at school. Doping proliferates among athletes. Auditors and fund managers go to jail for insider trading. Winners seem to take all while the desire to win consumes all, inciting panic and despair. We now know that competition often doesn't work, that the best do not always rise to the top and the so-called efficiency of competition creates a great deal of waste. So what are our alternatives? What are the skills needed for creative collaboration and how do we hone them? Talking to scientists, musicians, athletes, entrepreneurs and executives, in the follow-up to her bestselling Wilful Blindness, Margaret Heffernan has discovered that, around the world, individuals and organizations are finding creative, cooperative ways to work that don't pit people against each other but support them in their desire to work together. While the rest of the world remains mired in pitiless sniping, racing to the bottom, the future belongs to the people and companies who have learned that they are greater working together than against one another. Some call that soft but it's harder than anything they've done before. They are the real winners, sharing a bigger prize.
Book Information
Published: Feb 27th, 2014
ISBN-13: 978 1610392914
Publisher: Simon & Schuster
Purchase from:

Featured Review
"Economists have taught us that competitive self-interest ultimately benefits everyone and makes society more productive, but Heffernan believes the opposite. This is a brave exercise. What follows is a meticulously researched and engagingly written argument that even the most strident proponents of competition will find hard to refute. Heffernan's narrative is replete with examples of individuals and organisations that have found alternatives.Universally relevant and hard to fault, this is an important contribution to an expanding genre."
Book Reviews
Reviews Index
The Times Kirkus Reviews The Observer 800-CEO-READ The New York Times Irene Ogrizek The Guardian Strategy+Business
The Times
Why Winning Is Overrated
By Damian Whitworth
Review Publication Date: March 1, 2014 Everywhere Margaret Heffernan looks she sees fellow citizens who have become terrible C-words. After years of corporate breakdowns, ethical corrosion, financial crashes, stalled politics and overheated rhetoric, she thinks it is time we re-evaluated how we run our lives. We have become a society of hateful competitors. Fear not. This is not a polemic from a 1970s sociologist or a dreary. Educationalist advocating non-competitive sports days. Heffernan, an American who studied at Cambridge and lives in Britain, has run a variety of internet businesses and is the author of the bestselling Wilful Blindness, which examined the phenomenon of people ignoring the truth when it is in plain sight. The thesis of A Bigger Prize, which bears the clunky subtitle "Why competition isn't everything and how we do better", is that we are gripped by a "quasi-religious fervor to compete". Even though Darwin scholars can't agree whether Darwin himself would have been a social Darwinian, we accept that nature seems to provide a "survival of the fittest" justification for the way we struggle against each other. The reality, says the author, is that competition often doesn't work. The best don't necessarily rise to the top, and so-called efficiency has a strange habit of creating waste. The cost of competition can be seen at home where sibling rivalry leads to a lack of trust and generosity. Endlessly assessed and ranked, some children self medicate, others buy coursework over the internet, while increasing numbers starve themselves. Heffernan talks to couples who compete in their marriages. David was successful at work, so his wife, Susan, says she dominated domestic life. "I wouldn't let him win at home ... so he had an affair at work." An employee of a Wall Street hedge fund describes how no one shared ideas because they hoped to set up their own funds. "Every other person constituted a threat. It was very unpleasant." Sport is becoming fiercer and richer and more than 30,000 American cheerleaders end up in emergency rooms every year. Heffernan criticises the system of architecture competitions which she claims (architects may dispute this) cannot be won with smaller, subtler buildings. Constructions like Renzo Piano's Shard appear "oblivious to the inequality they came to symbolise". "I am not at all convinced that small is beautiful but I am persuaded that big is dangerous," she writes. She examines the hubris of RBS's colossal growth under Sir Fred Goodwin and heads to North Carolina to examine the environmental impact of massive pig farms. Rather than relentlessly driving to be the biggest, the first or the best, Heffernan argues we need to collaborate more and better. For scientists sharing information is vital, but individuals are haunted by the prospect of being scooped by rivals. The Human Genome Project was a triumph of international collaboration and data sharing, despite the fact that Craig Venter at Celera was running a rival project to map the human genome. John Sulston, the Nobel prizewinner who had a lead role on the project, says that competition didn't make the project faster or cheaper and led to thousands of genes being commercially patented by Celera. Musicians complain that some top performers are so focused on themselves that they don't hear the music. Adele, on the other hand, used more than 100 people on her album 21. Heffernan says even supposed heroic soloists like Steve Jobs work best with peers, like Jonathan lve at Apple and John Lasseter at Pixar. Heffernan praises companies that do not pursue remorseless cost-cutting and outsourcing. She visits Emma Bridgewater's pottery factory in Stoke-on-Trent. Wages might be higher than in Malaysia but customers pay for quality and creativity. Sometimes it feels like the author is overstating the place of competitiveness in modern life and underplaying the huge amount of co-operation that already exists. But while any sensible person already recognises that excessive competition is not healthy, this is a timely view of how a compulsion to compete is often counterproductive and could cause graver problems on an increasingly crowded planet. Pushy types really are everywhere. On the book's cover the publisher, apparently without irony, has a line stating that Heffernan's previous book was shortlisted for a business book of the year award. A book prize? Sounds a bit darned competitive.
Other Books by Margaret Heffernan